How to use the Ojibwe People's Dictionary 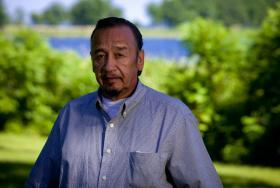 Amik was born in Washington, D.C. and raised in Aazhoomoog (Lake Lena District of Mille Lacs) from the age of six months by his mother’s aunt and uncle. The family spoke only Ojibwe. He attended an all-white country school as the only native student. In 1968, he was drafted into the US Army, and after serving in the military, moved to Los Angeles, California after enrolling in the Urban Indian Relocation Program.

Amik returned home in 1971, and worked primarily as a language instructor for the Minneapolis Public Schools, Nay Ah Shing School, University of Minnesota - Duluth and Leech Lake Tribal College. Since 1999, he has served as the director of language and culture for the Mille Lacs Band of Ojibwe.

with support and collaboration from the University of Minnesota's Department of American Indian Studies and University Libraries.

Many of the words in the Ojibwe People's Dictionary have related resources. Click through to the full dictionary entry to hear audio recordings, see images, read documents and watch videos. Here's a key to resource icons.